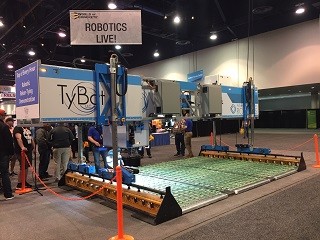 At World of Concrete 2020, the Advanced Construction Robotics / TyBot team was front and center during Robotics Live. Company founder Jeremy Searock, described the workings of Tybot, then gave a live demo of the device. TyBot is an autonomous rebar-tying robot that won the Associated General Contractors of America’s Innovation Award and was named a BuiltWorlds DISRUPTOR that is changing the jobsite. TyBot’s purpose is to alleviate the pain of an industry-wide worker shortage by assisting with bulk rebar-tying operations. Through the usage of artificial intelligence and robot vision, TyBot self identifies, and ties its way up and down rebar mats. TyBot is currently deployed on several significant projects such as Pennsylvania's mile-long Central Susquehanna Valley Transportation River Bridge Project, and Florida's multi-faceted Osceola Parkway expansion.

TyBot has travelled far and wide, garnering attention from industry leaders and media outlets across the globe. Its ability to increase productivity, improve workers safety, and save money is impressive. TyBot came to reality through a unique industry partnership between construction executive Stephen Muck and robotics expert Jeremy Searock. These co-founders assembled a team of world-class innovators with a bold goal: bring the benefits of a manufacturing environment to a dynamic jobsite.

Searock also described the company's next innovation, the soon-to-come IronBot, an autonomous rebar transport and placing robot that carries the rebar to the intended location and then places it according to requirements. The skilled crew follows behind IronBot to secure the rebar with minimal frame ties. TyBot then completes the bulk tying to finish the rebar installation.

This device is a part of the robotic revolution that will soon sweep the construction industry. Other robotic innovations at WOC 2020 included the Faro robot "dog."